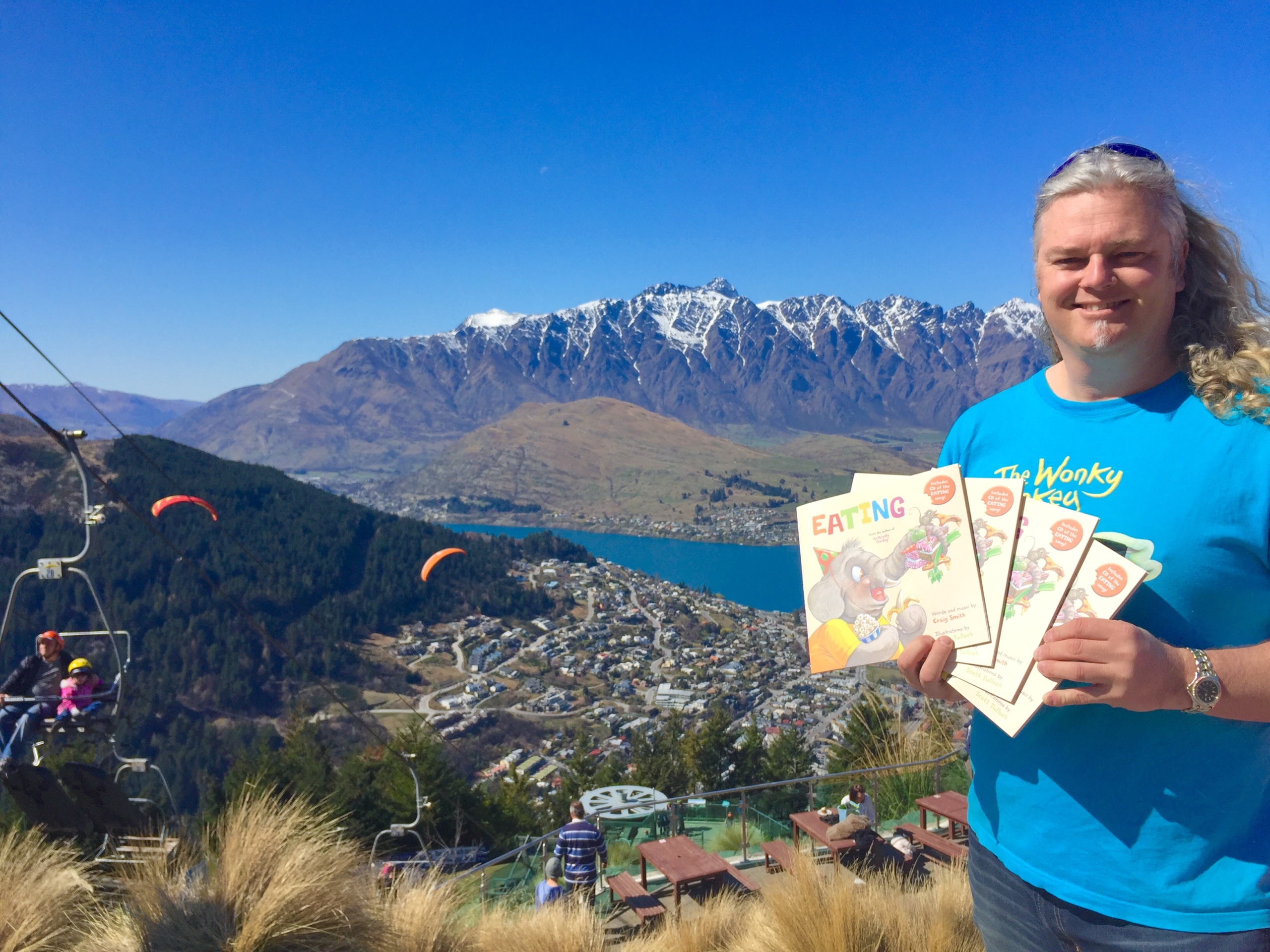 The author of No.1 best sellers The Wonky Donkey and Kaha the Kea will unveil his latest offering to Queenstown families and school holiday visitors as part of a special Skyline Queenstown family-focused morning.

EATING, Smith’s second self-published book, is already finding favour with kids. It’s a story with songs about a birthday party and the fun and diverse foods and eating styles enjoyed by the party participants.

I’ve been performing songs from the book as I’ve toured the country and kids just love it,” Smith says. “They absolutely crack up as we explore eating and where that food ends up. Parents and kids alike have been asking me when EATING will be a book – and now it is, complete with more wonderful illustrations by Scott Tulloch.”

Skyline Queenstown general manager Lyndon Thomas says family fun with Craig Smith seemed a great way to show appreciation of a local performer and help launch the book from Queenstown to the rest of the world.

“Kids love the Wonky Donkey man. EATING is a wonderful book for kids with plenty of scope for hilarity. Kids also love the Luge, Gondola and fun to be had at Skyline, so for us it’s an awesome combination and a great activity for the school holidays,” Thomas adds.

The fun starts at 10am and goes through till midday. It includes performances from Smith, free face painting, $5 luge rides and $4 kids’ pizza and drink combos from Skyline’s Market Kitchen. And EATING, which includes a CD, will be on sale at the Skyline Shop.

Smith is a New Zealand chart-topping author – The Wonky Donkey reached No. 1 and has sold over 500,000 copies since release six years ago. His first self-published book, Kaha the Kea, also reached the top spot and has stayed in the top 10 for two years. Smith is also globally acclaimed after winning a coveted spot to perform to thousands at the children’s section of Glastonbury, the world’s biggest music festival.

Publishing funds for EATING, his second self-published book, were raised through PledgeMe – a New Zealand crowd-funding platform. Smith pre-sold more than 600 copies at $25 each to raise the $15,000 required to complete the project. The creativity behind the book was a Wakatipu affair, with Smith based in Queenstown and illustrator Tulloch living in Arrowtown.

About Craig Smith
Better known as the Wonky Donkey man, Smith is much loved throughout New Zealand for his delightful and humorous songs and stories. He is also a singer/songwriter preforming cruisy, easy listening acoustic music for adults. He is based in Queenstown where he lives with his partner and young daughter. His albums and books, including EATING can be purchased from www.craigsmith.co.nz.