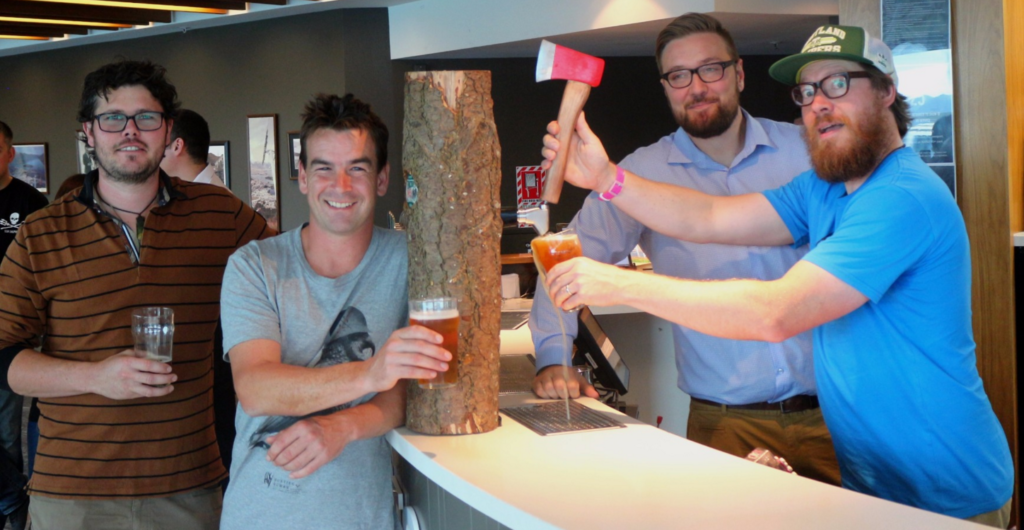 Skyline Queenstown has taken a novel approach to raising awareness about a major local environmental issue.

The tourism operator has partnered with award-winning Queenstown craft beer company Altitude Brewing to produce an exclusive tap beer that acknowledges the threat of wilding pines in the area.

The Tenacious Timber is an XPA beer – a style that sits between a traditional pale ale and an India pale ale, and will be launched at Skyline’s Stratosfare restaurant and bar on Otago Anniversary Day (Monday, March 21). Members of the Wakatipu Wilding Conifer Control Group (WCG) and the Department of Conservation are among invited guests to attend the launch.

The idea was sparked when Skyline discussed the idea of developing its own beer, Skyline food and beverage manager Pierre Poyet explains.

“We are not brewers, and we wanted to use local craftsmanship when producing the beer. So we approached Altitude and worked with them to create a recipe for us that would fit our brand well, and tell the story of the wilding pines.”

Wilding pines are a major threat to the Wakatipu landscape. They replace native beech forests and tussock and are capable of significantly changing the landscape. Skyline runs quarterly eradication programmes to control a large area on Bob’s Peak, tackling seedlings and medium-growth trees. Skyline also donates a significant amount of money to the WCG each year.

“We have a very unique landscape up here, and it’s one that we need to be aware of and protect for generations to come,” Poyet says.

“Many people who come up to Skyline don’t actually know why we are trying to get rid of the trees, and we have to explain that they are destroying our native flora. The beer will be a good conversation starter, so we can inform more people on a daily basis.”

Altitude Brewing managing director Eddie Gapper says he and founder/brewer Eliott Menzies thought it would be a good idea to include an Australian hop, because of the popularity of Skyline with Aussie visitors.

“The specifics of the recipe were left entirely up to Eliott and he developed it after rigorous research and testing. The Tenacious Timber will be characterful yet approachable, like all of our beers, with a fruity/citrus aroma and a fresh, easy-drinking palate. We think The Tenacious Timber will fit perfectly into our range of award-winning beers and give every craft beer fan in NZ a great reason to head up the gondola,” Gapper says.

Altitude Brewing has designed the tap badge with a “timber man that looks suitably rugged and tenacious to help bring the problem of wilding pines to life”, he adds.

“It is incredibly important for businesses to help improve the communities in which they operate. With our ‘1% for the Wakatipu’ programme already in place, it felt like a very natural fit when talking to Skyline about using the beer to help support their efforts at wilding pine control,” Gapper says.

The title of The Tenacious Timber came about through a competition Skyline held to name the beer. Local man Anton Schmitz created the winning name.

Wakatipu Wilding Conifer Control Group manager Briana Pringle says: “Wilding pines are huge problem and the WCG, with the help of many in the community, are trying to eradicate seeding trees over a substantial part of the Wakatipu to help prevent the trees spreading further. We are grateful to Skyline Queenstown and Altitude Brewing for their support and for coming up with a fantastic idea to raise awareness.”