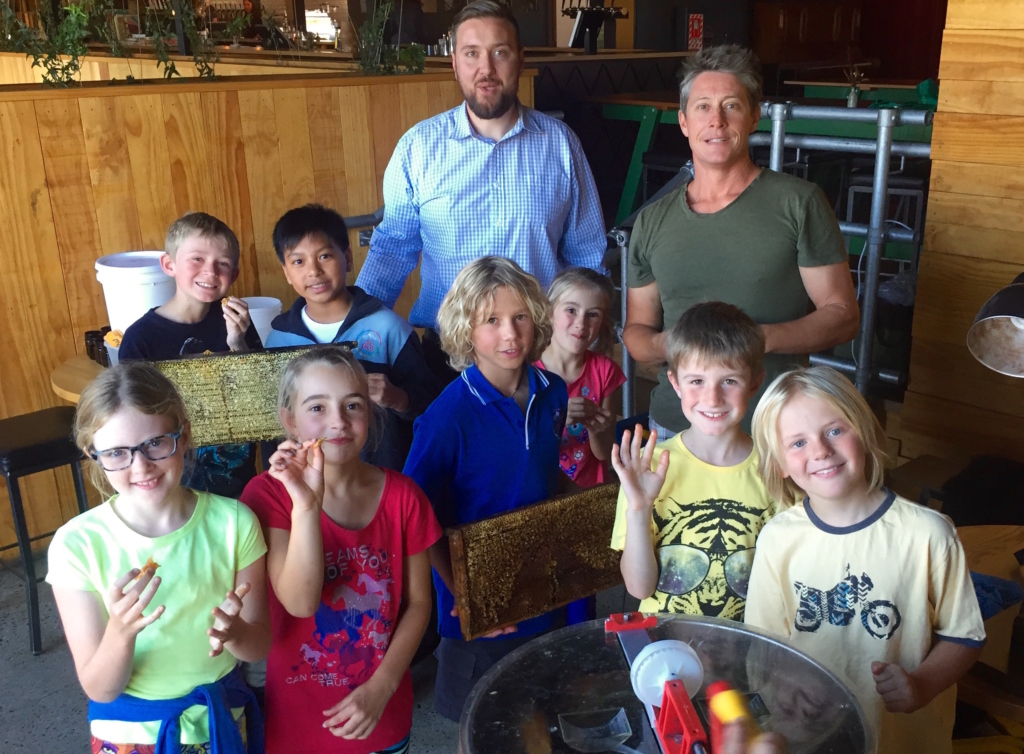 A fun bee-keeping educational experience for Queenstown Primary kids is about to get sweeter thanks to tourism operator Skyline Queenstown.

Skyline and local bee-keeping company Tiny Fury have spent the past 10 months working with Queenstown Primary kids to ultimately make honey to sell – and on Tuesday (March 8), 108 bottles were produced to become a lucrative school fundraiser.

Skyline has sponsored two bee hives for the school since May last year and they have been tended to by Tiny Fury owner Nick Cameron at a site on Gorge Road.

Queenstown Primary kids of all ages have been involved from the very beginning – from painting the exterior of the hives, learning about bees, hives and honey in the classroom, through to the extraction and bottling process.

Skyline also ran a label competition last year, with the two children behind the winning designs getting a free excursion up the Skyline Gondola with their families. The winning labels have been printed to put on the bottles of honey.

Some 27kg of wild flower honey was extracted from the two hives on Tuesday, and poured into 250gm jars to be sold for $12 each. Cameron, joined by Skyline Queenstown Food and Beverage Manager Pierre Poyet, showed a group of children how to extract the honey from the honeycomb at a commercial kitchen at The Sherwood.

“This is the first season for the hives so most of the bees’ effort goes into making the honeycomb instead of the honey. But 27kg is a good amount for the first season – I’d expect that to be double that next year,” Cameron says.

Poyet says the good yield this year and even better yields in subsequent years means it’s an opportunity for a significant amount of money to be raised.

“As part of Skyline Queenstown’s ongoing community fundraising initiatives, this project appealed to us because we have helped provide an innovative, educational way of raising money that benefits the kids in many ways. It goes so much further than rather than just giving a cash donation to the school,” he says.

“Skyline Queenstown is passionate about sustainable development and sponsoring hives is another way of making a difference.”

“All our camps are supported by fundraising. If we didn’t have them, the kids wouldn’t be able to go. So even if we make $1000 from selling the honey, after the cost of jars and printing labels, that’s $1000 of pure profit for the kids. We are really grateful to Skyline Queenstown for their help.”