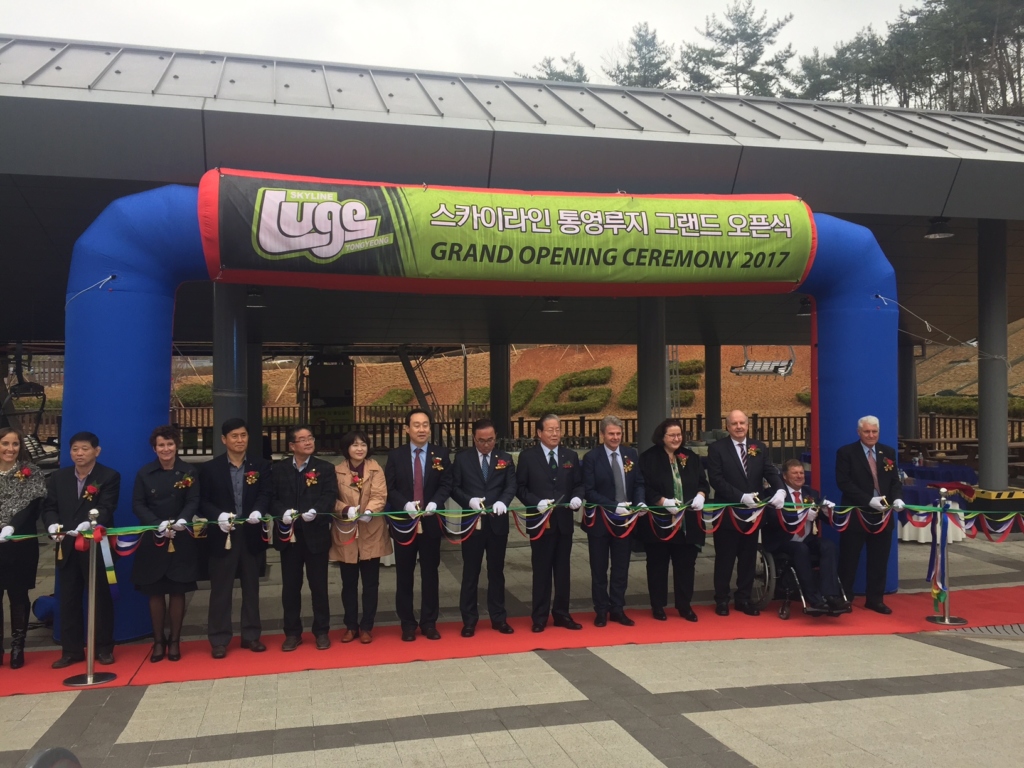 About 210 dignitaries, local and national government officials, community leaders and local residents gathered at the new Skyline Luge Tongyeong site yesterday to celebrate the launch of the popular tourism activity into South Korea. The attraction opened to the public in February.

Built in just 15 months, the Skyline Luge Tongyeong project is believed to be the largest direct capital investment in South Korea by a New Zealand company.

Tongyeong City Mayor Kim Dong-Jin, Lee Koon-Hyeon from the National Assembly and New Zealand Ambassador to South Korea, Clare Fearnley, were among the figureheads that spoke at yesterday’s ceremony. Together they planted a camellia from South Korea’s Camellia Island during the ceremony, to signify the partnership between the company and South Korea.

Skyline Executive Chairman Mark Quickfall says the opening of Tongyeong Luge development is an important milestone in the company’s history.

“Skyline created the world’s first Luge cart on wheels almost 35 years ago – and we are immensely proud that it has become a global tourism success. The Skyline Luge Tongyeong development has been a vision of Skyline’s for the past five years, and it has been an absolute pleasure to turn our dream into a reality with the strong support of Tongyeong City and South Korea.”

Since opening in February, Skyline Luge Tongyeong has exceeded expectations for visitor numbers, with 216,000 people riding the Luge in just two months.

The complex – featuring up to six tracks, a detachable five-seater chairlift and two terminals – is located directly below the coastal city’s iconic Hallyeosudo Landscape Cable Car. Tongyeong is a domestic tourism hotspot and the cable car attracts more than 1 million visitors each year.

Skyline Luge Tongyeong contains the world’s second-longest track, at 1.5km. One of the planned six tracks has been completed, with the remaining five due to be finished as demand requires.

Skyline has been operating the Luge since 1985 in New Zealand. With sites operating in New Zealand (Queenstown and Rotorua), Canada and Singapore, Skyline Luge Tongyeong is Skyline’s 6th site.

About Skyline Luge
Skyline Luge is a unique wheeled gravity ride that provides riders full control over their descent on purpose built track. The Luge is a fun-filled outdoor experience that is suitable for riders of all ages and experience levels. Once is never enough!