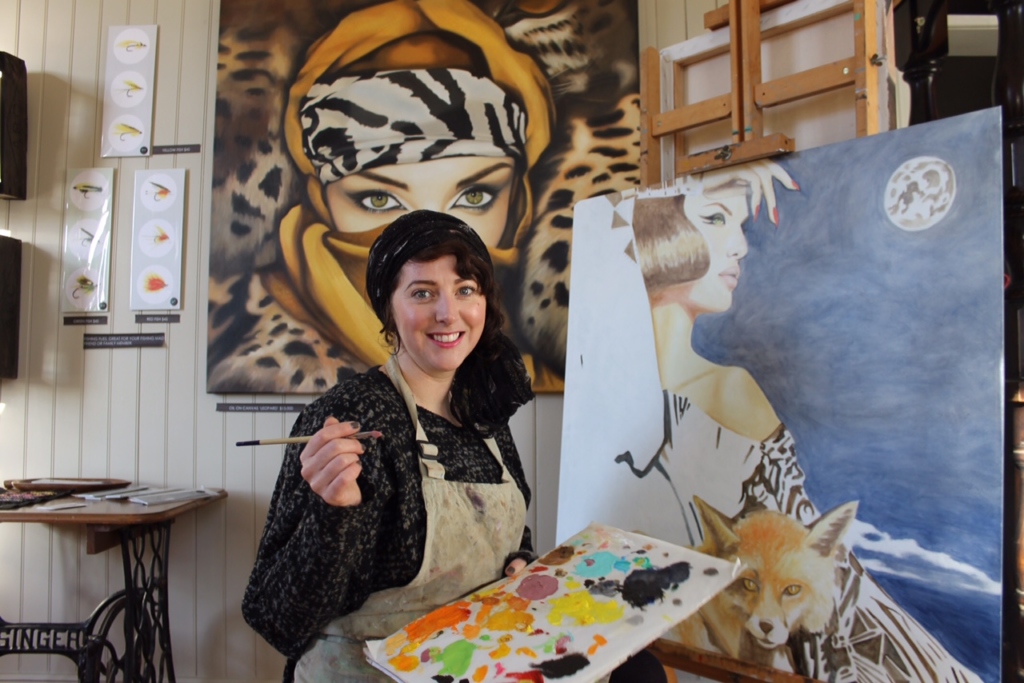 Prominent New Zealand artist Melissa Sharplin has moved her studio to Wanaka’s historic Cardrona Valley, with fresh motivation for a major exhibition after a two-year hiatus.

Sharplin, 35, recently opened her own gallery and studio workspace at the historic Cardrona School House, next to the Cardrona Hotel.

She has recently produced a small series of delicate watercolour and graphite drawings and prints, inspired by NZ’s culture and Kiwiana. On display at her new gallery space, the collection features fishing flies, fantails on china teacups, retro Maori dolls and kingfisher birds.

Sharplin is planning a new series of birds to be unveiled in spring 2015, while also planning another major exhibition featuring oil paintings and mirror art to be staged in a couple of years’ time.

“I’m working on a NZ native endangered bird series, but I’ll be focusing on the more obscure birds that don’t get as much funding as our Kiwi bird. I worry because these birds aren’t as well-known, so they don’t get as much attention or funding. I wanted to help somehow. I might not be any good at trapping, but I can draw, and if some of my proceeds can help even one little feathered family, I’ll be a happy artist. The birds will appear in a variety of mediums with the tools they need to survive, such as rat and stoat traps,” she says.

The new-pop realism artist’s last major exhibition, the acclaimed Swit-Swurl, was in 2010. At the time, Swit-Swurl was the highest-valued exhibition to be sold outside of a NZ gallery. A planned exhibition in 2014 was interrupted by the Christchurch floods.

Formerly from Christchurch, Sharplin has moved to Wanaka after recently living in Waiheke Island. Her time spent at Waiheke Island was an opportunity to reflect on traumatic events – getting caught in the Samoan tsunami in 2009, the 2011 Christchurch earthquakes and having her work affected by the Christchurch floods.

“Waiheke Island gave me the time to heal from those events. Now, I’m filled with passion and ready to roll,” Sharplin says.

“The Cardrona and Wanaka communities have been so welcoming. I lived here seven years ago for a ski season, so it’s lovely to be back. It’s such a beautiful place, so I’m really inspired to get painting again.”

About Melissa Sharplin
Melissa Sharplin is a self-taught artist who specialises in realism, portraiture, nudes, water colours and abstract paintings. With a background in fashion design, she first gained notoriety with art lovers and mainstream media with her Retro Nudes exhibition in 2008. Her 13-piece Swit-Swurl collection sold for $10,000-$33,000 per work, making it the highest-valued exhibition to be sold outside a NZ gallery at the time. Sharplin is inspired by fashion, colours, fabrics and the strength and beauty of women. She is passionate about creating a story by marrying images together – mainly women with animals that become extensions of her character. She is also inspired by native bush and bird life, plus New Zealand’s rugged landscapes. Sharplin’s Cardrona Valley studio is open Tuesday to Sunday, 10am-4pm.

Photo caption: Melissa Sharplin at work in her Wanaka studio and gallery.