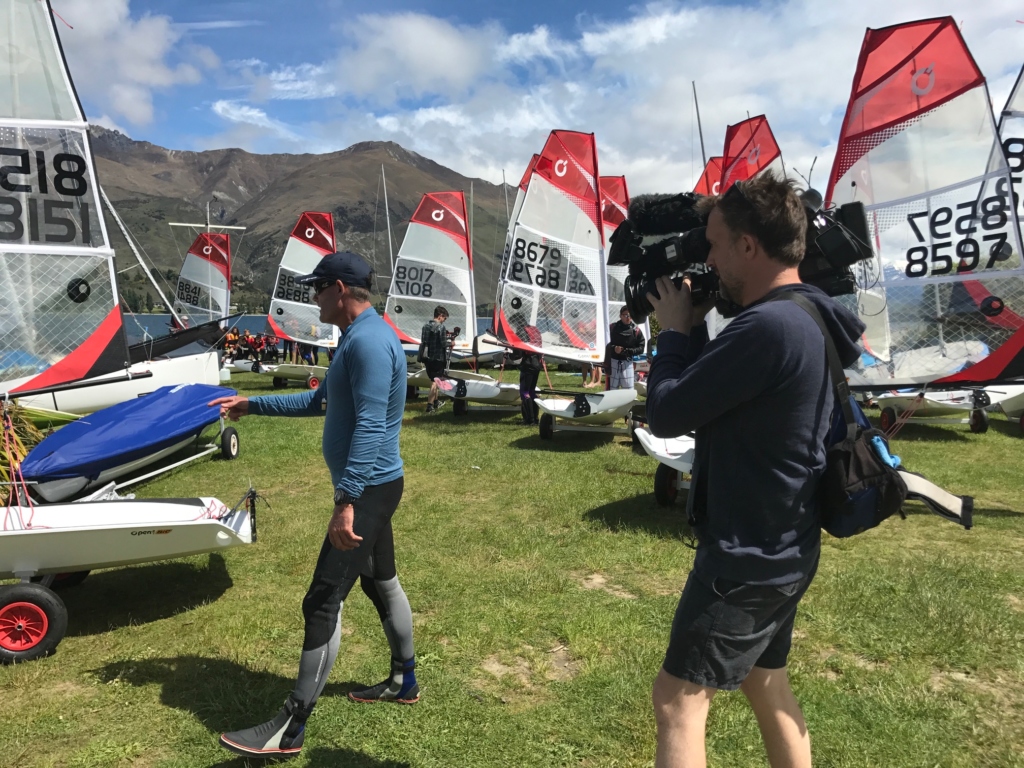 The 2017 America’s Cup CEO will help the club introduce a new race to the well-known regatta – a leg of the O’pen BIC Junior National Circuit – amid other sailing races that take place from January 6-8.

The Wanaka regatta is a major fixture on the South Island sailing calendar and has been running for more than 50 years. Wanaka Yacht Club commodore Jeff Mercer says there’s a lot of interest in this year’s regatta.

“Lake Wanaka is a great sailing destination and as our regatta takes place in the holidays it makes for a really fun and festive event. With Russell’s support and the increased fleet, we are looking forward to a great regatta,” Mercer says.

Coutts will also hold another O’pen BIC boat coaching clinic on January 5-6 with promising young sailors from around the region – two months after he ran his first clinic at Wanaka Yacht Club. Former Team New Zealand teammates Barry McKay and Hamish Pepper, who now live in Wanaka and are local yacht club members, will help Coutts coach the sailors.

The O’pen BIC racing takes place on Saturday and Sunday (January 7-8). Also racing around various courses on Lake Wanaka as part of the weekend regatta will be sailors in all dinghy, catamaran and trailer yacht classes in the annual Mitre 10 Roy’s Bay Regatta.

The racing includes the NZ Freshwater Etchell Championships takes place on Friday and Saturday. Two island adventure races are scheduled for Sunday – the Ruby Island Race (open to all dinghy and catamaran classes) and the unique Mou Tapu island endurance race. Both races are open to senior sailors only.

“We are thrilled to have Russell back to play an important part in our major regatta of the year,” says Craig Fahey, Wanaka Yacht Club’s youth sailing coordinator.

“Russell is really impressed with what we want to achieve with the club. We share the same philosophy when it comes re-introducing the ‘fun’ element into junior sailing – he’s right behind us working towards becoming a centre of excellence for youth sailing in the South Island. He suggested we incorporate our regatta into part of the national O’pen BIC circuit, and we thought that was a great idea,” Fahey adds.

Coutts is also bringing with him two 12-year-old boys from Bermuda, who are part of the America’s Cup Endeavour Program [subs: crrct]. The initiative is aimed at introducing sailing to youngsters who normally wouldn’t be given the chance.

Coutts, who sailed at the Lake Wanaka Regatta in his early teens in 1978, says he’s looking forward to returning to Wanaka: “Not many people have sailed on these lakes down south and it’s a shame because they’re ideal for sailing,” he says.

“It’s great to have a regatta down here and to get people from other parts of the country to experience these sailing conditions.

“The Wanaka Yacht Club’s fleet is growing, with a lot of interest from young people. The Club’s proactive approach towards youth sailing is in line with what I’d like to see happen with youth sailing around the country,” Coutts adds.

The popular New Year’s Regatta has attracted more than 30 entries from around New Zealand. In addition, there’ll be about 30-plus O’pen BIC boats sailing – which makes for a great spectacle and a bumper regatta on Lake Wanaka.

“The Wanaka Yacht Club New Year’s Regatta is well known as a destination event for South Island sailors. Normally we get about 25 boats entered, so this year’s entry numbers are a significant increase on previous years,” Fahey says.