Innovative tourism operator Skyline Queenstown has a vision of being a major leisure destination that adds to the amenity of Queenstown for both locals and visitors. As such, they are investing $100 million to replace their entire gondola system and redevelop the bottom terminal and upper complex.

The challenge for Scope Media was to effectively communicate all elements of Skyline’s project so that the public, stakeholders and media fully understood the proposal – and that concerns were understood and addressed by Skyline.

We began with developing a communications strategy that now underpins all of Skyline Enterprises’ communications activity. We undertook stakeholder analysis, created key messages and presented a variety of tactics to support the objectives. Offline activity included free community open-days to learn about the proposed development and online activity saw the creation of a website dedicated to informing the public about the project – both of which were well-received. We also sought and obtained public endorsement from national industry bodies.

We continue to support Skyline Queenstown and Skyline Enterprises as they work through the various stages of this important development. 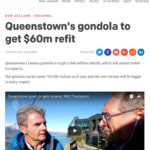