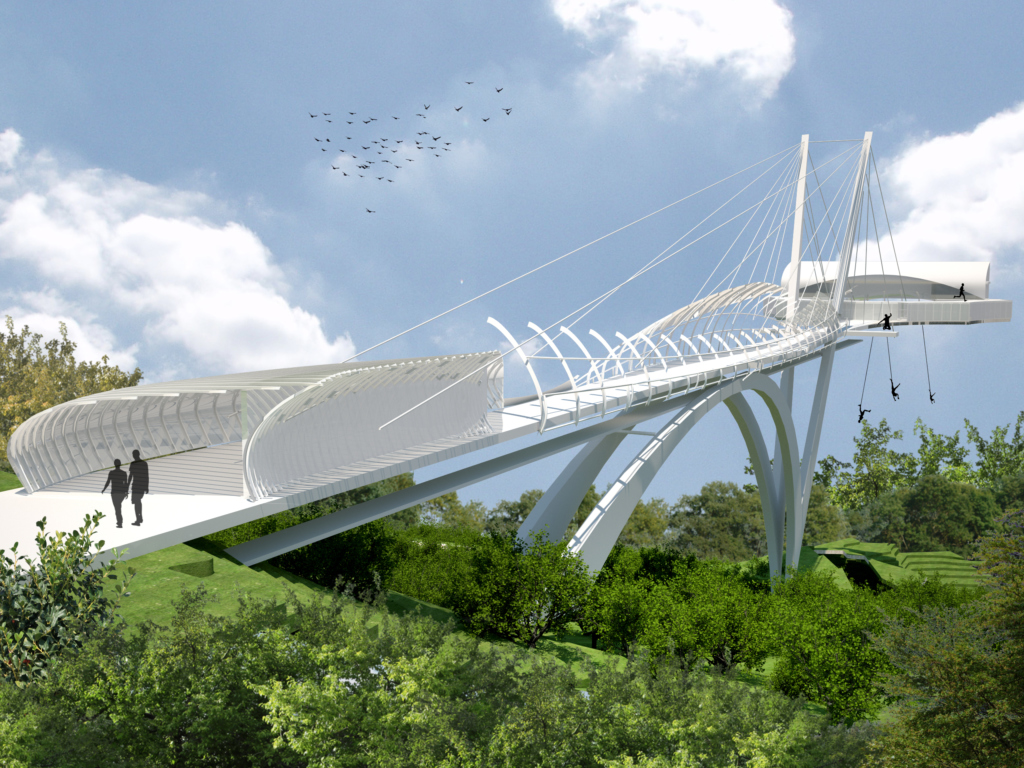 Hackett, who introduced commercial bungy jumping to the world almost 28 years ago, has never been busier, spearheading bungy projects in Singapore, China and Russia.

First to open to the public is a development in Singapore’s Sentosa Island. Comprising a 47m jump, two giant swings, a vertical skywalk, a sky bridge vertigo experience and restaurant and bar from a purpose-built tower, the $SGD12 million project is due to open in May 2017.

Late 2017 will see the opening of the world’s highest bungy jump off a major engineering feat. AJ Hackett International is the official bungy operator at the famous glass bridge in China. Located in Zhangjiajie, Hunan province, the structure is the world’s highest and longest glass-bottomed bridge. The AJ Hackett International bungy platform will be mounted beneath the glass bridge, offering a 260m-long jump when it opens. There’ll also be a giant swing platform, flying foxes and another 40m bungy off a bridge above the glass bridge.

“There’s a lot happening in the next 18 months,” Hackett explains. “We’ve never opened as many sites of this calibre in such a short timeframe. We’ll double the size of the international company within the next three years.”

In addition, the company is diversifying its operations at Macau, China. Home to the world’s current highest bungy jump (233m), the attraction will also include jetboating by the end of 2018. And Hackett’s luxury Indonesian resort, Pondok Santi Estate on the island of Gili Trawangan, is set to undergo a huge expansion to triple its current size.

Hackett divides his time between Singapore, Indonesia, France and more recently New Zealand, due to his daughter Margaux being based in Wanaka, although he’s increasingly spending more time in parts of the world where new business is developing. The major projects are a combination of fully-funded by AJ Hackett International, joint ventures or private/government investment.

After almost 28 years with Hackett at the helm, the company’s success is down to sticking to its core values and a philosophy of doing business sustainably and with huge amounts of innovation, he says.

“We’ve always been really careful about where we operate and who we operate with,” Hackett explains. “Thanks to our track record of being really innovative, an impeccable safety focus and managing human risk, we now have individuals and governments coming to us, saying ‘we need this in our country’. They tell us, ‘we want our people and visitors to experience this personal challenge’. Then we get carried away with designers and make everything really cool. There are plenty of things you can jump off but we want it to be special – whether you’re jumping or just participating.”

The developments haven’t been without their challenges, however. In conservative Singapore, the company spent more than four years working with authorities to be able to open, including spearheading a law change to make bungy safer.

“We don’t give up easily. If we believe in something we will do everything it takes to realise that dream,” Hackett says.

About AJ Hackett International
The AJ Hackett worldwide groups of companies represent the ultimate innovation and commitment to excellence in adventure tourism. Inspired by the vine jumpers of Vanuatu, pioneer AJ Hackett has won international acclaim for turning Bungy jumping into an extreme sports phenomenon. AJ Hackett International also operates many other innovative personal challenge experiences outside of Bungy jumping and continues to challenge the norm in all aspects of culture and business. For more information, visit www.ajhackett.com.